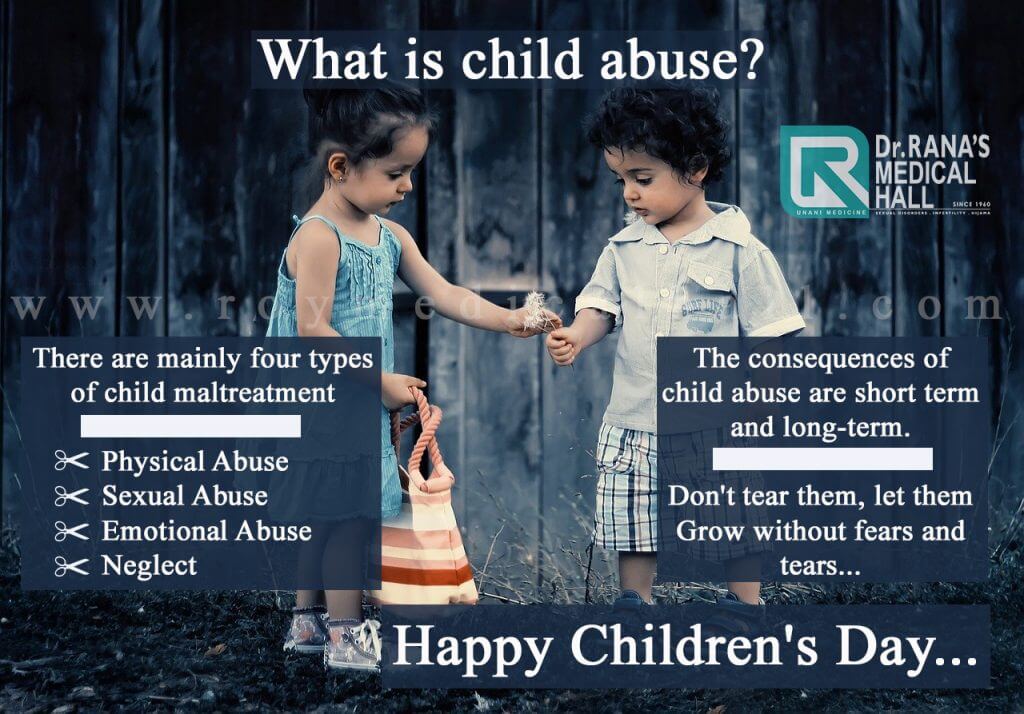 What is child abuse

WHAT IS CHILD ABUSE?

According to The World Health Organization (WHO), child abuse and child maltreatment is “all forms of physical and/or emotional ill-treatment, sexual abuse, neglect or negligent treatment or commercial or other exploitation, resulting in actual or potential harm to the child’s health, survival, development or dignity in the context of a relationship of responsibility, trust or power. It is distinguished into four types of child maltreatment: physical abuse; sexual abuse; emotional (or psychological) abuse; and neglect.

Physical Abuse: Intentional use of physical force against the child that results in – or has a high likelihood of resulting in – harm for the child’s health, survival, development or dignity. This includes hitting, beating, kicking, shaking, biting, strangling, scalding, burning, poisoning and suffocating. Much physical violence against children in the home is inflicted with the object of punishing.

Child Neglect is the failure of a parent or other person with responsibility for the child, to provide needed food, clothing, shelter, medical care, or supervision to the degree that the child’s health, safety or well-being may be threatened with harm. Neglect is also a lack of attention from the people surrounding a child, and the non-provision of the relevant and adequate necessities for the child’s survival, which would be a lack of attention, love, and nurturing.

How safe are our children?

We hear lots of heart-wrenching News about child abuse in daily and social media. It’s happening around the globe, in spite of caste, creed, race, religion, language and GENDER…

Child abuse is the worst thing that is happening in our universe. Whenever we hear a piece of news, its hard to believe that this still exists in this empowered, evolved world, but the truth is that its happening everywhere in rich and poor families, among educated and uneducated people, all cultures, schools, workplaces and even in homes. It’s our duty to demolish this cruelty from our society.

WHAT CAN DO AGAINST CHILD ABUSE FROM OUR END?

Domestic violence against children is becoming more and more alarming.parents and families should take care to exclude children from the same. Arguments, fight and abuse between parents and family members will affect them mentally and many times they’re even prone to physical abuse inside their families itself.

Sexual abuse is a major problem that affects our children. The saddest part in child sexual abuse is that a good percentage of sexual assault they face is from close family members or family friends, and sometimes children did not realize that they’re being abused.

We, parents, teachers or family members should make them aware of that. Teach them the difference between good touch and bad touch.

Make them aware of the private parts of the body and the courage to say no to assaulters. Speak to them, be mentally connected, so that they’ll open up when they face any such issues.

Proper parenting is needed, many social organization is guiding parents by conducting seminars, counselling and other methods to make them aware.

School or educational institutions can help a lot in demolishing this from our society. Awareness about sexual abuse or any other abuse should be done at schools. Counselling can help a lot to understand the chaos of children.

The support we give to the victims is very important.

How to maintain healthy sex life in a long-term relationship?

Early Ejaculation – Why Unani Is The Best Treatment?